The passing of Clayton Christensen was a blow to the business world, but his legacy of disruptive innovation lives on.

If you have not, I recommend reading Innovator’s Dilemma. It is one of the most influential business theories of our day and changed the thinking of many business leaders, including Steve Jobs, Andy Grove from Intel, and Marc Andreesen, which he discusses with Christensen in this Startup Grind video here.

For those that are not familiar with the concept of disruptive innovation, it is defined by Christensen as: “A process by which a product or service takes root initially in simple applications at the bottom of a market and then relentlessly moves up market, eventually displacing established competitors.”

Perhaps the most interesting part of the research Christensen did was uncovering what allowed for disruption to occur.  He found that the companies that were being disrupted were not poorly managed, instead, it was precisely because they were well managed, focused on serving their customers and increased profitability, that there was space at the bottom end of the market for new companies to take share. Once established, these companies improve their offer to the point at which it becomes compelling for the middle and even the high end of the market.  Christensen has spoken about how Toyota disrupted GM and Ford, and then was disrupted by Kia and Hyundai, and now by Chinese brands like Chery 奇瑞 and others. The only way to avoid this is to “disrupt yourself” by introducing offers that your current customers would not buy and at a lower margin than your existing products, which are generally not looked upon favorably at established companies. In fact, these products are often times spun off, such as the PC division of IBM to Lenovo in 2004.  This is why disruptive innovation usually occurs by outside companies rather than inside existing ones. That said, there are examples of products that are simple and cheap, but effective, that last for decades or even centuries. This happens because there is little to no room to disrupt them from below. For example, there is the simple mousetrap, which has been selling for 120 plus years, or the pull tab opener on a soda can, patented in 1967. 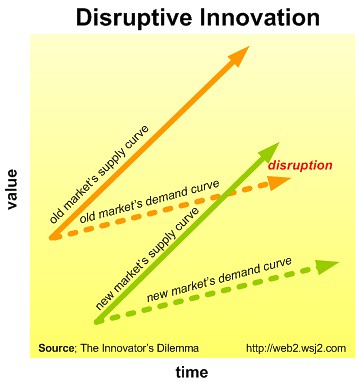 On the other hand, big-ticket enterprise software applications are ripe for disruption. One of the first and most successful firms to do this was Salesforce.com, which disrupted Siebel and became the market leader in Customer Relationship Management and Salesforce Automation based on a SaaS model. It led the way for many similar disruptions to occur and broke down many of the barriers to entry around security and control. About a decade ago, I saw this opportunity in Pricing and CPQ, an industry that I have been involved in since the beginning of my career.

I was first exposed to pricing and CPQ in 2000 working closely with two of the original CPQ software vendors. In 2007 I moved to a Gen 1 price optimization software company that was subsequently acquired.  While it had established itself as a leader in B2B price optimization, it became apparent to me that the path the market was going conflicted with the interests of the existing customer base, which made up the product direction board.  When asked, these large and established companies would answer that they did not want to put pricing into the cloud, even though this was the trajectory of enterprise software. Their large IT organizations wanted to maintain security and control over the process.  In other words, the company was experiencing the Innovator’s Dilemma.

We talked about it a lot internally but were unable to steer the company in a new direction, especially because of the consulting culture, which was based more on customers than the market as a whole.  This consulting culture and the focus on services revenue and profit is the opposite of a market and product-led organization that characterizes the most successful software companies (a topic that is, perhaps, for a different article).  That said, after the acquisition, in 2015, I moved to a pricing and CPQ company that was 100% cloud-native from day 1.

In 2016, at a Professional Pricing Society conference, I had the opportunity to speak on the topic of “Disruptive Innovation in Pricing and CPQ”.  I made the case that the reason the pricing software market had not taken off more readily was that it was dominated previously by large enterprise software projects, and these projects were scary because they entailed risk, cost, and quite frankly people had to put their career on the line for them.  Moreover, after implementations, many of the Gen 1 solutions were not flexible enough to change with the market and require costly upgrades and maintenance.

The industry was ripe for a new breed of company, 100% cloud-enabled, configured in the UI. These traits made faster implementations, at much lower risk, and were much less scary.

This change is not only a result of cloud technology but it is also a function of business model disruption. As Christensen also pointed out “The most disruptive changes are changes in business models, not just technology.” A cloud-based solution is part of it, but it’s also configured in the UI, allowing business users to make changes, with faster implementations. In addition, the product’s subscription model equipped with no long-term commitments is equally important.  All of these serve to reduce risk to the customer and allow them to get to a positive ROI faster.  Gen 2 company’s cloud-native options are disrupting the market, and the results are clear. With the Gen 1 providers, you would have to spend millions of dollars to get your first dollar back. That equation has now radically changed.

Why is a new company able to disrupt the space when the established companies saw it coming? It’s a bit like the Titanic…companies can see the iceberg but can’t steer the ship out of the way in time.  But if you jump off the boat and go build a more modern, smaller, and faster platform, you can navigate around them.  And once people see that newer, faster boat, you bet they are going to want to jump on board.

This momentum and inability to change are what allows new companies to come in and disrupt established spaces. It is easy to put on-premise software in the cloud, but Gen 1 companies still have the existing clients and implementations with the old way of doing business and they either need to build or acquire this technology.  Therefore, they are forced to take the maintenance dollars from their existing customers and invest it in developing new technology that those customers won’t be using unless they migrate, which carries a significant cost, risk and usually a loss in the customization they have invested heavily in already.  This is not an easy position to be in a company that is at the heart of the SaaS revolution. Even something as simple as revenue operations and billing-based on subscriptions can be a massive challenge for existing companies that are not built to support these models, as it touches every business process from marketing to sales to finance to operations.

Perhaps the most exciting part of this is that a 100% cloud-native platform company allows for an acceleration of innovation to occur as there is no “baggage” of existing on-premise implementations, complex support matrixes, different releases and databases, and servers, etc.  All customers are on the same release and get access to the latest innovations at no cost to them.  This means that companies are able to get the latest innovations as they occur, and the accessibility of the application allows them to change their pricing strategy and tactics as the market changes.  This allows for truly dynamic pricing, augmented with rules and machine intelligence, creating a competitive advantage for the companies using it.  In the age of digital disruption, in more industries, being able to price dynamically and change your strategy and tactics quickly is becoming table stakes.

The Art of Listening: How to Bring Customer Focus Back to Everything You Do