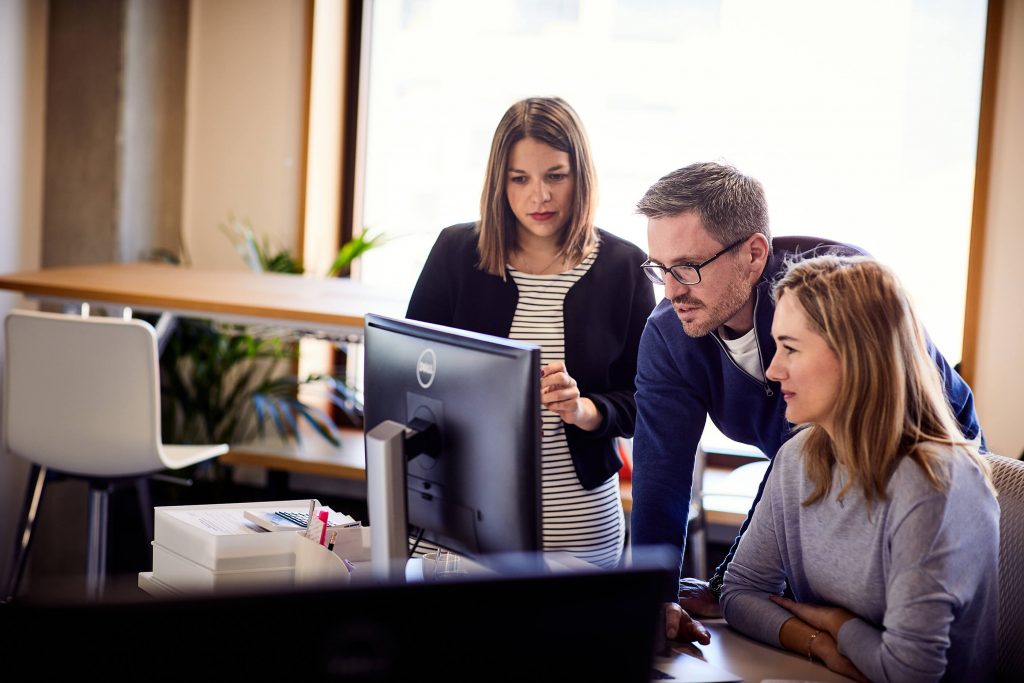 Smarter, Faster and More Customizable Unity Is About to Change the Way Users Interact with Pricefx

Every day, employees of almost 100 different companies, situated in 37 countries around the world, log into Pricefx to find strategic solutions to their pricing problems. From November 3, 2019, users will be able to locate these solutions more quickly, efficiently, and intuitively thanks to the launch of Manhattan release, Pricefx’s first substantial update since Bramble release.

The Manhattan release ushers in a raft of changes that significantly improves the working lives of Pricefx end-users. Improvements have been made across the board to Pricefx Core, Classic UI, and, notably, Unity UI, Pricefx’s most recent, touch-ready user interface. Updates to Pricefx Core and Classic UI come into effect first, followed by Unity UI a couple of weeks later. Users can expect ingenious new features and striking interface modifications alongside enhanced stability and security.

How Unity Improves the Working Lives of Its Daily Users

Updates in Manhattan have been designed to improve the speed and flexibility of both interface and calculation capabilities. There have been some major changes, most noticeably in Unity UI, and some smaller improvements that might seem subtle on the surface, but have wide-ranging, positive implications.

Unity UI has been taken to a whole new level with this latest update. First developed in 2017, Pricefx’s most advanced, intuitive, and customizable user interface now contains several modules that have never been seen inside Unity before. PriceAnalyzer, PriceBuilder, RebateManager, and Master Data Management are all available, aligning Pricefx’s most potent tools with its most impressive and effective dashboards. Classic UI users will soon be able to transition over to Unity, gaining a more in-depth insight into their pricing strategies and data.

Users of PriceAnalyzer will be happy to know that its charts are now even more useful in this latest release. Data points can be excluded with a swift click of the mouse, making it quick and easy to get rid of awkward outliers that are skewing your results. Logarithmic axes are supported, and enabling or disabling them refreshes charts automatically. Latitude and longitude are newly supported in Highmaps too. 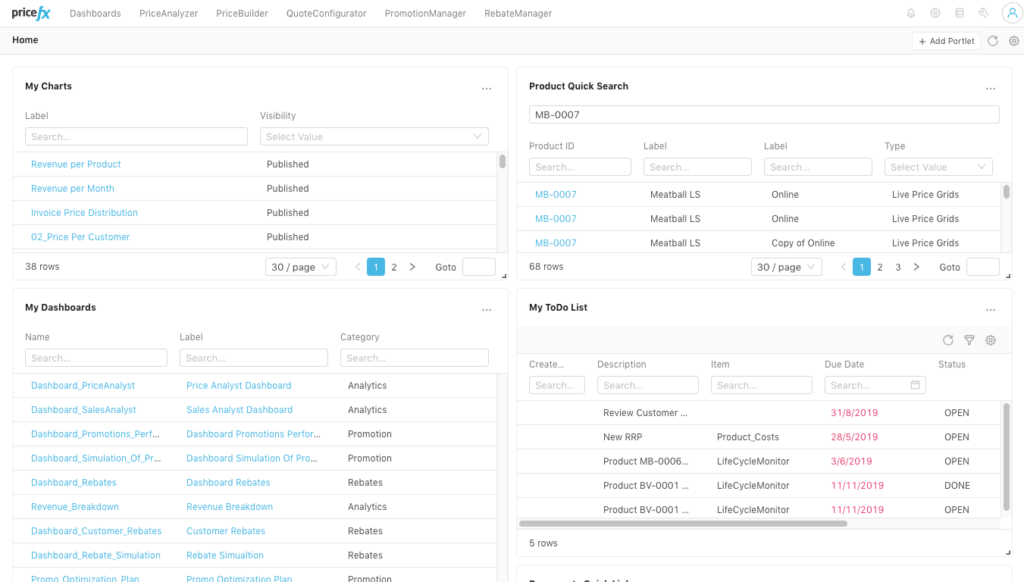 A look at the new interface

PriceAnalyzer’s new method of dealing with errors is a complete game-changer. Error messages are displayed in all-new, easy-to-read pop-ups that locate errors in CSVs with pinpoint accuracy, often down to the specific row. The way it deals with exporting data sees another pivotal improvement. Its innovative zip downloading capability means data is exported in zip files, compressing large quantities of data into smaller files that upload more rapidly to the server.

One of the most critical updates in Manhattan is the way that PriceAnalyzer deals with data uploads, a process that has been a thorn in the side of some users for a little while. Transferring a very big file to the server can take up to five minutes, and parsing the file might then run for 10-15 minutes more. In previous versions of PriceAnalyzer, users could not find out until the end of the process if their file contained an error. If it did, then that could even be more than 20 minutes of valuable time wasted. Manhattan offers a giant step forward in this regard. Users can monitor the progress of their uploads in real-time with errors identified as they arise. As soon as an error crops up, the user can halt the upload, identify and rectify the error, all without needing to wait until the end. It is a massive timesaver (and a gigantic stress-saver too!)

Manhattan kicks PriceBuilder into a higher gear courtesy of Configurable Headers for Price Lists and Live Price Grids. Configurable Headers is a feature that has come directly from customer feedback, and massively enhances the speed and flexibility with which users can interact with the module. The configurable Headers can display, for example, summaries or a chart representing historical sales. There is also the option to have price drivers or other input parameters that the user can adjust for the given Live Price Grid. PriceOptimizer has evolved in Manhattan too, with its calculations run on multiple nodes of multiple servers concurrently, multiplying its speed several-fold and streamlining the entire process. 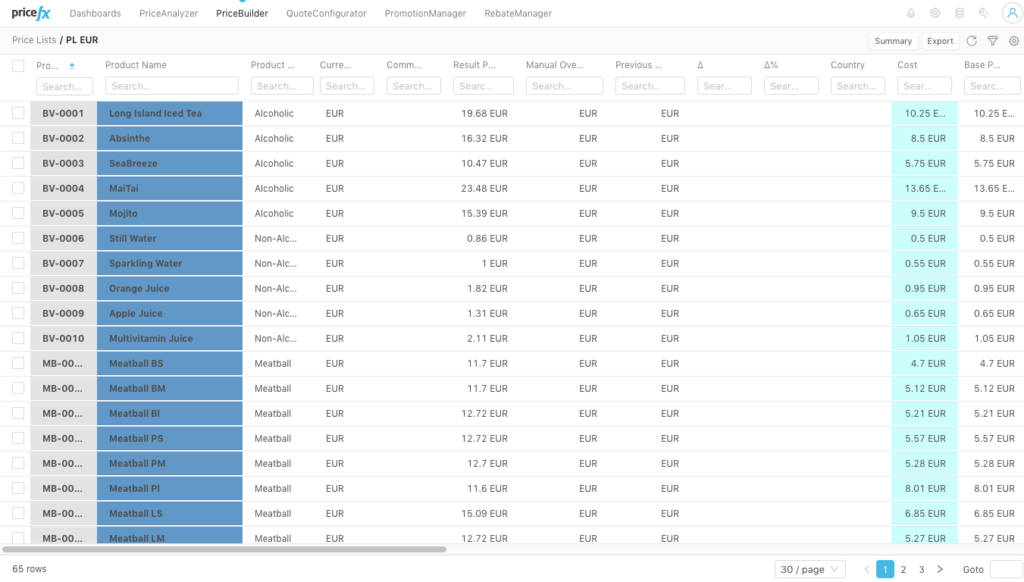 Configuration Wizard has also seen significant advances behind the scenes giving users far greater control over system changes. The Pricefx ecosystem is highly user-friendly, but there is no denying its complexity, and when pricing strategies change and pricing parameters shift, users often need a helping hand. Previously a one-page solution, the new and improved Configuration Wizard uses a series of “Next” buttons to guide users through a multi-step process improving accessibility for even the most inexperienced users.

Manhattan Means an Even Shorter Time to Value

Manhattan has been designed to deliver on Pricefx’s industry-leading commitment to providing rapid time to value and the lowest total cost of ownership. The update has been made possible by listening to feedback at every stage, putting power back into the hands of the users, giving them greater control over the pricing tool that they interact with daily. Whether it be the result of Unity UI’s customizable dashboards, PriceBuilder’s new configurable headers, or more transparent error messaging, Pricefx pushes its flexiblilty and user-friendliness even further.

Pricefx remains the only 100% cloud-native pricing solution, which means users can continue to benefit from ongoing updates and improvements without the need for a vast dedicated IT department or risky software overhauls. Pricefx users in shared environments will be pleased to hear that their update to Unity will take place automatically with no advanced technical input required.

Five predictions driving transformation in the food and beverage industry

The pandemic turned the food and beverage industry on it's head last year, but what does the future hold? Marcel Koks of Infor has five predictions for businesses to succeed