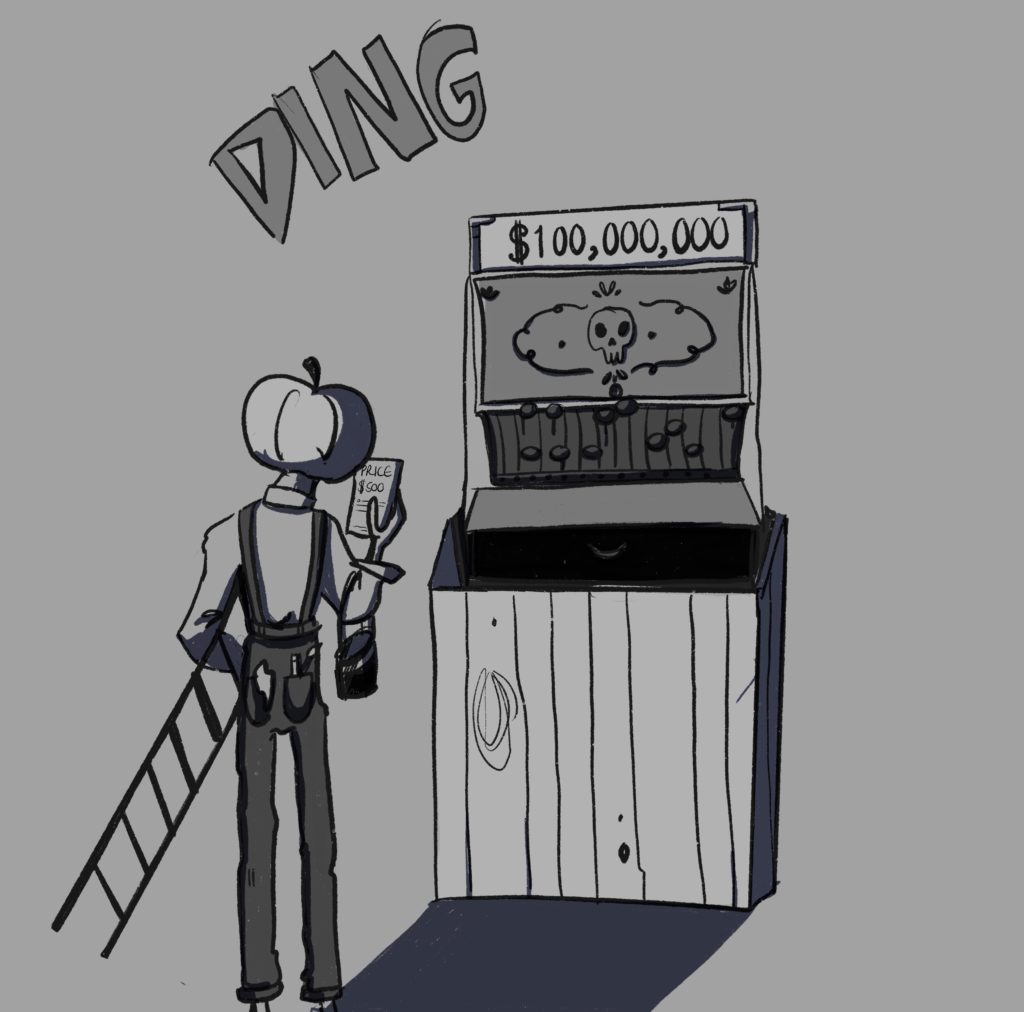 The Tale of the Amateur Cash Desk Horror

This story is the fifth part of a series of articles “Horror Stories in Pricing – When Pricing Goes Wrong”. The fourth story can be found here.

“You are still here?” Eric’s voice penetrates the darkness. His words fall in a deathly clatter like the fingers of a dodgy Eurosceptic MEP typing up their accommodation expenses form for a property they are leasing to themselves.

Eric leans forward, the light from his laptop illuminating a face so kind, you almost wanted to adopt him right there on the spot – were it not for certain macabre tendencies that other less favorable lights cast, that is.

“I want to continue on theme I just told, but go into greater detail… For this story, I want to take you on a journey of Neolithic proportions! It is a cautionary tale, one I could not influence as the story was told to me by a colleague. I will not tell you her name as it would not be fair. But it is Sheila from the office next to mine. This is an archaic tale with a modern setting. An anachronism, and I don’t mean a fear of spiders. Although the web I am about to spin might suggest otherwise.”

He chuckles to himself at his joke, almost spilling the peated single malt on his chin in the process.

“This tale starts, as all tales must, at the beginning.”

Michael draws nearer, so keen to hear Eric’s story. If he had drawn any closer, he would have been behind him.

“There was a company, probably still is, called Art Attack,” he begins. “They sold paint, brushes, ladders, etc., to decorators of projects so huge, they would make Michelangelo shudder! They prided themselves on not only having the finest selection of professional paint supplies on the planet, but the finest salespeople to sell them to you! It was said, their sales guys were so good at negotiating that they could get a peace deal agreed before the soldiers were even out of boot camp. So, when it came to getting great deals on pricing for their customers, it was only the best prices for their lucky clients.”

“Yes, they were. Right up to the point when they reached into their Gucci laptop cases, and instead of extracting a top-spec Apple Mac Pro to write up the order, produced a scruffy note pad, a sheet of carbon paper and a ballpoint to write it down, that was.”

Eric’s eyes narrow as they stare into Michael’s. They cloud over a little, and he shakes his head. He draws back into the darkness as if to hide his face.

“Like most of the stories I am sharing with you, it gets worse. After this order was scribbled down on the pad, they would tear the sheet out of the pad, thrust one copy into the hand of the dumbstruck customer, the other in their own back pocket, shake hands and bid farewell. To “close” the deal, they would fax their copy to headquarters and retire to the nearest bar to drink their own body weight in Piña Coladas and Red Bull.

The customer, although a little taken back, was still pretty much on a high for getting such a good deal. Later that week, they would head to the warehouse to gather the goods. Stepping through the doors of Art Attack, they would search the dusty shelves for the items on their order, then take this mountain of goods to the till, the money in a small clutch bag in used 50–dollar bills.

The woman behind the counter looked old enough to have been turned away from the last supper for trying to order the vegetarian option. One by one, she entered the goods into the computer. The computer’s cogs whirred and clicked as each item was added. With a pull of the lever, the final amount was revealed. “150,000 dollars,” she declares.

At this point, the customer’s jaw has hit the ground so fast and hard, it has gone through two floors straight down to the basement, and a small family of dormice was considering using it to sleep in for the winter.

The customer reaches in his pocket for the piece of paper. “But, but,” he splutters. “Your salesman promised me 2,500 dollars for cash!”

The old lady peered at the paper, sniffed it, crumpled it between her fingers while holding up to her ear as if trying to tell a genuine Havana cigar from a cheap cheroot. She leaned forward to the customer.

‘I beg your pardon?’ the customer blushed.

‘Oh I see. Well, it definitely sounded like he was faxing it. Unless he just was having a bad asthma attack or making Cappuccino…’

‘Aha,’ a smile appeared on the woman’s cracked lips. ‘This is Wednesday. We only update the computer on Thursdays, twice a year, regular as clockwork. Can you come back in March?’”

Eric is almost shrieking with hysteria at this point – his acutely-trained pricing brain fighting with the lack of logic this story contains. A tear falls from his eye as if producing its own waterfall effect. He stops talking. A clock ticks. A disinterested tram rolls by.

“Needless to say,” he says, breaking the silence after what seems like ages. “They lost their deals to a local competitor. If only I had been there to save them. But, you can’t save ‘em all. Not if they don’t want saving in the first place!”