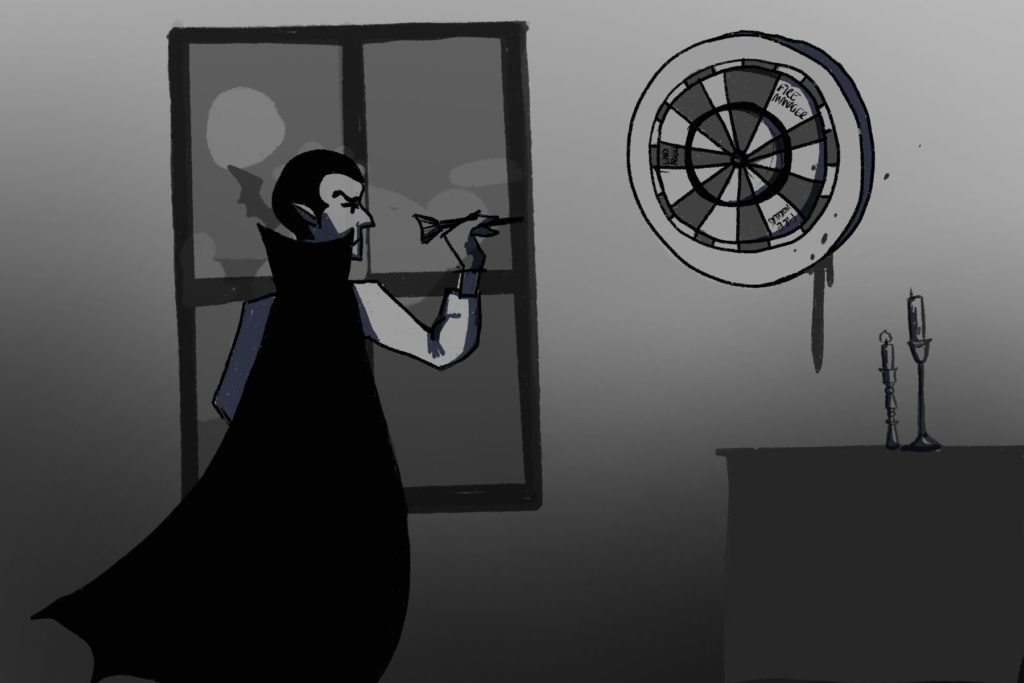 The Tale of the Vampire You Couldn’t Count On

This story is the second part of a series of articles “Horror Stories in Pricing – When Pricing Goes Wrong”. The first story can be found here.

“So, what happened next?”, Michael exclaimed.

“Well, I finally caved and bought a proper projector myself for the company. There was only one and it was often shared between departments and floors,” Eric responded.

“Oh, trust me, it was. The whole project was a nightmare. The regional department heads would get into arguments refusing to work with each other let alone with us. The initial user story sheet was completed by people who had no idea about pricing and that part of the project was assisted on by a completely different firm who were no longer in the loop due to company politics.”

Michael gulps. Unsure of what to think about what he just heard, he thinks, “What am I getting myself into?”

Eric notices the shocked look on Michael’s face. He idles over to a locked cabinet and pours the pair a shot of Glenfiddich Gran Cru.

He continues, “I almost begged Bob to take me off the project. As a matter of fact, I left the project for a year and when I came back, it took another year and a half to complete the initial scope which, by the way, was constantly changing.”

“I left thinking I’d seen the worst of it. Turns out, fate was not done with me yet.”

Eric takes another sip as he settles into his seat.

“I’ll start this one off with a little joke.

A man walks into a pet store and wants to buy a parrot. The owner points to three identical looking parrots and then to the parrot furthest to the left. ‘That one is $500’.

‘But they’re exactly the same.’

‘Yeah, but that one knows how to use a computer.’

‘Ok, so how about the last one? Let me guess it can code.’

‘Ah well, I’ve never really seen it do anything else, but the others call it boss.’

Eric cracks a smile. “And that’s basically what happened at Leightons Industries.”

“This was yet another project that Bob had called me in for. I was excited because I had worked with one person at the company before and it had gone extremely well – Shelley Andrews. Know her?”

“Well back then, it was just Shelley Andrews, and she was a whiz. So after the whole TyMo debacle, I was excited to jump at the opportunity to work with Shelley again. It’ll be a cake walk, I thought”

“Again, I packed up my bags ready to settle into what would be my office three days out of the week for the next six months.”

This time, the security at reception knew to expect us, so that was a nice change, and my team and I were shown to a small office with enough seats, tables and, would you guess, LAN cables. I almost cried with joy.

I was already in contact with Shelley and we were busily sending notes back and forth so that I would get a better understanding of what was needed for the project. In my mind, this would be a breeze.

The office assistant informed us that our liaison at Leightons would be Andrei Dascalu and that he would be in with us at his earliest convenience.

Before I even had a chance to register this change in direction, I saw Shelley hurriedly walk toward me.

“Hey Eric”, she started as she reached out for a hug.

I took a step back, a puzzled look on my face.

“I’m sorry, I just found out. I’m being pulled to work on other internal projects because, and I quote, ‘your skills would be better suited elsewhere’.”

“But you built the whole pricing strategy. You’re the best person to help lead the implementation project.”

I chuckle in disbelief.

Shelley smiles as she responds, “Yeah, well, one of the new heads of department wants to take lead on this so…” Her voice trails off.

The pricing organization at Leightons’ was always in an uncomfortable position between different departments. As a result, any other head would only have partial knowledge about the pricing strategy and that didn’t mean they would really understand the intricacies.

It was good, while it lasted.

Shelley promises to lend a hand when she could but she’ll be busy working on other projects, so, I don’t hold out much hope.

Three hours, at his earliest convenience, we finally meet with Andrei Dascalu.

He’s a tall, slim man with broad shoulders in an impeccable black suit and thin tie. He seems to be in his late 40s with hair graying at the temples.

As he turns to greet me and the team, he winces at the glare from the sun coming over my back. His already pale and sallow skin seems to blanch making a blister on his forehead stand out even more. He reaches out to shake my hand and practically crushes it as his dark eyes meet mine.

As we settle around the meeting room, he leans back in his chair and presses his fingers together as if in prayer.

He begins, “Shelley sent over the user stories that you have already worked on. I can’t say I’m impressed. You’re completely missing out what we need here.”

I try to compose myself. The user stories are based on information direct from Shelley – the architect behind their whole strategy. I almost can’t believe what I’m hearing.

I start a reply when Andrei raises a hand in motion as if shooing a fly.

“I know you’ve been working with Shelley on this. That stops now.” His eyes drill into mine before he continues.  “My assistant will send you my notes for our needs before we proceed.”

With a flourish, he stands with a curt nod, and exits the room.

My team and I look around. It’s almost like we’ve been in a cyclone and now need to get our bearings.

Every user story that we return is simply not good enough. Even when we follow his notes, there seems to be an issue with each iteration. It’s almost like he has set out to sabotage the project – no matter what.

As time moves on, we finally settle on a story that works for Andrei with a new project scope, but I am uneasy about the final specifications I put out. At the last day of the project, I walk with my head held a little lower. I’m simply not proud of the work that I put out.

I walk out of Leightons’ Industries offices for the last time and as I pass Andrei’s glass office, his back is to me, but his face is turned slightly. The sun comes out from behind the clouds and it seems that another blister surfaces on his face. His eyes roll to the corner to see me walk out.

The coronavirus pandemic led to a massive surge in online shopping, which is likely to remain post-pandemic—spelling good news for Amazon and Walmart.

With PRODx, Bill Berrien wants to build ‘the world’s most valuable manufacturing network’│Ep. 49

Pindel Global Precision entered 2020 making no ventilator parts for its customers. The New Berlin-based precision machining manufacturer exited the year having made thousands of parts for five customers.